Wi-Fi 6 has been around for a while now but while routers taking advantage of the technology are becoming more commonplace, mesh Wi-Fi systems are still playing catch up.

TP-Link aims to change that with the Deco X60, however, which comes in at a low-ish price, offers huge coverage and offers a tempting range of features.

READ NEXT: The best mesh Wi-Fi routers you can buy today

TP-Link Deco X60 review: What you need to know

The Deco X60 is primarily designed to replace your router and comes with an extensive range of security and parental controls features. It can be switched into access point mode to boost the speed and range of an existing router, too.

It’s a dual-band mesh system that supports 802.1ax (Wi-Fi 6) connections over 2.4GHz and 5GHz. Unlike tri-band systems it doesn’t have a dedicated wireless link between units so bandwidth must be shared between devices and router nodes, limiting maximum performance.

In the box are three units, all identical tin-can shapes, with an impressive total claimed coverage of 650m². Each unit houses four internal antennas and supports 2×2 MU-MIMO, and TP-Link claims connection speeds of 574Mbits/sec on the 2.4GHz band and 2,400Mbits/sec over 5GHz.

A price of £420 might sound a lot but the Deco X60 is decent value for a Wi-Fi 6 mesh system. The Netgear Orbi WiFi 6, which was the first such product we reviewed, costs more than £700 comes with only two units in the box.

There are cheaper Wi-Fi 6 mesh systems in the pipeline, however: both the BT Whole Home Premium (£270) and the Netgear Nighthawk Mesh WiFi 6 (£299) are available for £300 or thereabouts.

Each of the three Deco X60 units is identical in appearance and features. They’re cylindrical in shape, have a single, multi-coloured LED at the front, a physical reset on the bottom and a pair of Gigabit Ethernet ports at the rear.

That’s not much to go around, especially since smart home hubs and the like are so common these days, so bear in mind you may need to budget extra for a separate Gigabit switch to add connectivity.

As with many mesh systems, there’s no facility to share storage or a printer via USB, either, though the Deco X60 does make up for this with its range of software features.

The easiest way to set up the Deco system is via the Deco smartphone app, which takes you through setup, step-by-step, unit-by-unit until everything is up and running. I had the system in place and live in less than 20 minutes, which is exactly what you want from a modern Wi-Fi product.

Once the system is live, the app is used to manage the system’s various settings. There is a web-portal you can access with a browser from your laptop but it’s limited in scope and doesn’t allow you to access the same range of settings you can via the app.

The Deco app is split into three main sections. The Overview page shows you all the devices that are connected to the system currently and how much bandwidth they’re using up.

The Homecare section is for managing security and parental controls settings, while the More page gathers together a selection of tools such as a speed test, and advanced settings.

The Deco X60’s security controls are among the most impressive I’ve seen in any router, mesh or otherwise. Not only does it include antivirus cover for the whole network, courtesy of Trend Micro, it also has a malicious content filter, intrusion prevention system and will automatically quarantine devices it sees as a threat.

Parental controls are impressive, too. As with many systems, you can create users and groups of devices belonging to those users, and pause internet access for individual users with a tap of a finger.

You can set a “bedtime” schedule (for weekdays and weekends) and daily limits for each user (on weekdays and weekends again) for total time spent online. Most impressively, perhaps, there’s category-based web filtering with presets for young children, pre-teens, teens and adults, and the ability to block and unblock various categories of websites as you see fit.

As far as traffic management goes, that’s slightly less impressive. There’s nowhere where you can see a meaningful breakdown and analysis of who and what is using up bandwidth. There is, however, an easy to use QoS (quality of service) feature, which allows you to set certain devices as “High Priority” and prioritise certain types of traffic over others at a network level.

READ NEXT: The best mesh Wi-Fi routers you can buy today

Testing was performed in our usual way. I wandered around the house transferring a series of large files back and forth from the laptop to a network share and timed the results. I’ve compared the Deco X60 with the cheaper Netgear Nighthawk AX1800 and the Netgear Orbi WiFi 6, which is the fastest mesh system we’ve tested. 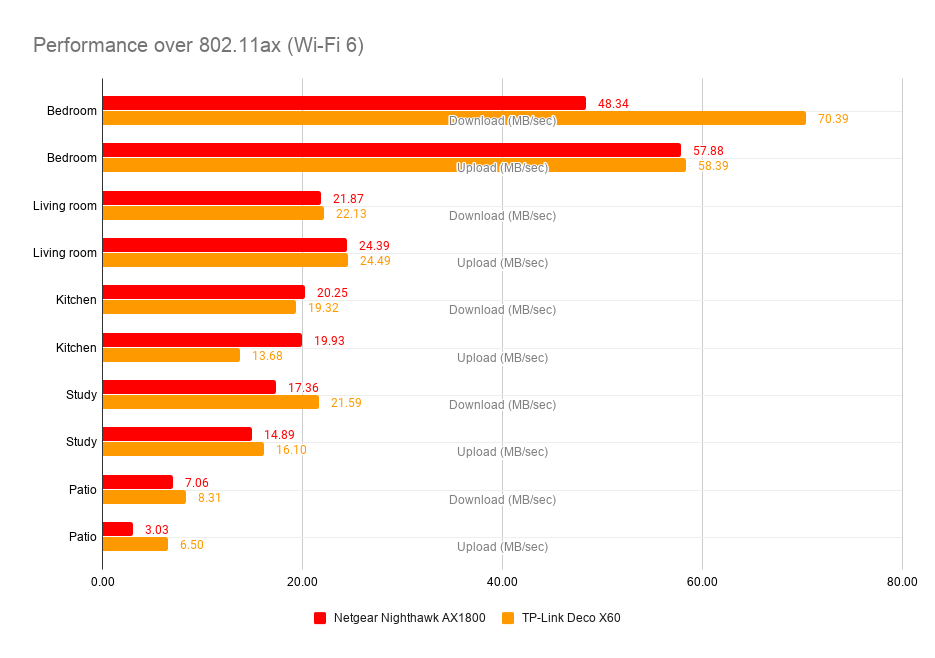 It’s clear to see that the TP-Link Deco X60 is the more effective mesh system than the Nighthawk, especially at close range. That’s what you’d expect given the higher speed rating of the X60. Speeds in the kitchen and living room were, surprisingly, closer together but the X60 eked out a lead again outside on the patio, suggesting it’s a more effective system for larger homes.

Impressively, the TP-Link Deco X60’s close-range performance was better even than the Netgear Orbi WiFi 6, the Deco X60 beating its top download speed of 60.3MB/sec by a 10MB/sec margin, and its upload by nearly double.

The Deco X60’s lack of a dedicated backhaul link showed in the medium-range tests, however. Where speeds fell to a maximum of 22.13MB/sec for downloads and 24.49MB/sec for uploads, the Netgear Orbi WiFi 6 managed to keep speeds up at around 48.1MB/sec and 23.9MB/sec.

The Deco X60 roughly doubles the speed of the regular BT Whole Home Wi-Fi in medium-range tests but lags behind our current favourite 802.11ac system, the Asus ZenWifi AC (around £250), which performs slightly better at medium- and long-range, even though it is only a two-box system.

The TP-Link is still a fast performer, though, and it’s priced quite reasonably for a system that has a rated coverage of 650m². The fact that it has security baked in and strong parental controls makes it a tempting purchase for families as well.

Thanks to its lack of a dedicated backhaul link, however, speeds aren’t quite as fast as they could have been and with some 802.11ac systems able to keep up over longer range, it’s not quite the obvious hit it might have been.

dagold - 8 March 2021 0
NEW DELHI: The government is likely to amend the telecom licence norms this month to incorporate the guidelines of national security directive on...

Myanmar envoy to UN: It seems like they have a license...

Foundation starts empowerment of 50 people in each LG, LCDA...

dagold - 5 March 2021 0
Tribune Online Foundation starts empowerment of 50 people in each LG, LCDA in Oyo state In its efforts to rid the society of poverty,...

‘Our goal is to drive job-intensive growth’

What are OnePlus phones? A guide to the company and its...

Kangana Ranaut reveals she was hired as a director in Hollywood...