There are a number of religious objects that claim to be authentic pieces of history. Take the pieces of wood from Jesus’ cross, fragments of Muhammad’s beard or the Buddha’s
tooth, for example. Because it’s difficult to verify the authenticity of these objects, they’ve remained largely outside the purview of science. The one notable exception, however, is a sheet of cloth in Italy, known as the Shroud of Turin.

Perhaps no religious relic has received more scientific scrutiny than the Shroud. A rectangular sheet about 14-feet-long and 3-and-a-half feet wide, the cloth is purported to be the shroud that wrapped Jesus’ body in the tomb. The most striking evidence for this is the image of a man imprinted on the cloth, naked and with hands covering the groin — caused by a yellowish discoloration of the cloth. What appears to be bloodstains are also visible.

The image is unmistakable, but the actual evidence for the Shroud’s authenticity is less so. That’s not for lack of trying. Serious studies of the Shroud date back to the 1970s, when multiple groups of scientists from various backgrounds conducted a series of technical examinations of the Shroud and the image on it. Their findings sparked academic debates and subsequent studies that would go on for decades.

Today, the bulk of evidence indicates that the Shroud originated sometime around the Middle Ages, and was created by human hands. Despite this, there’s still no consensus on how, exactly, the image was made, leaving the door open to a number of fringe theories and speculations.

The Shroud first appears in the historical record in the 14th century, and it was almost immediately contentious. One of the first recorded mentions of the Shroud is in a letter from a French bishop to the pope denouncing it as a forgery. Despite this, the Shroud itself continued to draw attention as it moved from France, eventually ending up in Turin, Italy, where it has resided for over 400 years.

Some of the first real studies of the Shroud were done by a French anatomist named Yves Delage at the beginning of the 20th century. His observations, and those from similar work done more recently, have largely backed up the hypothesis that the image corresponds to a man who had sustained significant injuries prior to death. Proponents of the Shroud’s authenticity usually point out that it looks like the man had been crucified, based on the wounds and bloodstains. 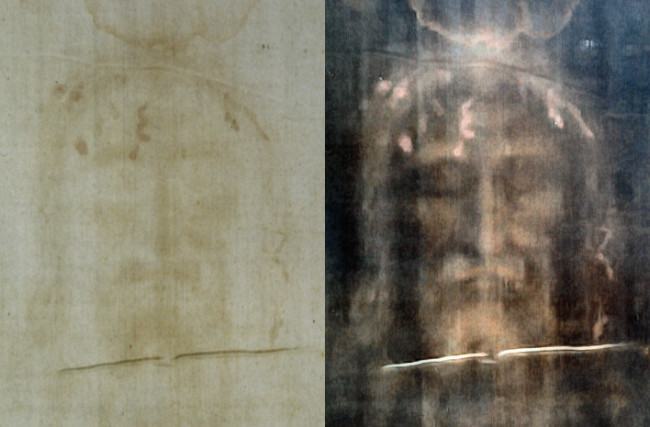 The image on the left shows the markings on the Shroud. The one on the right is enhanced to show more details of the face. (Credit: Dianelos Georgoudis/Wikimedia Commons)

But the attempts to examine the artifact scientifically didn’t really pick up until the 1970s. That’s when a diverse group of researchers who called themselves the Shroud of Turin Research Project (STURP) decided to take the matter on. It included chemists, physicists and researchers from various U.S. government institutions, though the group did have a few notable expertise gaps — there were no archaeologists, for example. They decided to take a close look at the Shroud using an array of modern techniques including X-ray and ultraviolet imaging, chemical tests, and optical processing using a machine designed for NASA images.

The team’s conclusions, published in 1981, seemed to hint that the Shroud’s origins were beyond the understanding of science. “There are no chemical or physical methods known which can account for the totality of the image, nor can any combination of physical, chemical, biological, or medical circumstances explain the image adequately,” the authors wrote.

At the time, the researchers ruled out the use of any type of pigment in creating the image, and wrote that they found evidence of real blood on the cloth. Additionally, they felt confident that the image had been created by contact with a three-dimensional object, such as a human body.

Later work also claimed to find evidence of real blood on the Shroud, and an analysis of pollen found on the Shroud pointed to origins somewhere in the Middle East. Further forensic work tied the apparent injuries on the Shroud to those Jesus suffers in the Bible. But other researchers weren’t so sure.

Walter McCrone, a chemist and expert in microscopy, conducted an independent analysis of samples borrowed from the Shroud by the STURP team in 1978. He reported that there was evidence consistent with pigments in the samples — a sign that someone had drawn at least parts of the image. His conclusion was that the Shroud had been created by a talented artist sometime in the Middle Ages.

More recent research indicates that some of the bloodstains are unrealistic for a corpse wrapped laying down. Additionally, a modern-day team managed to reproduce the image with methods available to Middle Age artists — another blow to the theory that the Shroud could not have been painted. 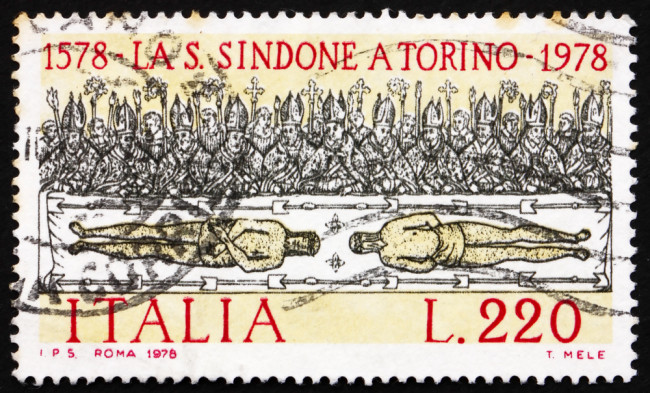 A commemorative stamp from 1978 celebrates the 400th anniversary of the Shroud’s relocation from the Savoy region in southern France to Turin, Italy. (Credit: Boris15/Shutterstock)

But the most damning evidence against the Shroud’s authenticity comes from a technique commonly used by archaeologists. In 1988, a team of scientists carbon-dated several small pieces of the Shroud and determined that it was created between the years of 1260 and 1390 — more than a thousand years after Jesus is believed to have died. Those dates also line up well with the first historical mention of the Shroud, in the 14th century, as well as McCrone’s findings.

Though there have been several attempts to contest the carbon dating results, none of them has stuck. The blood and pollen, meanwhile, do not necessarily indicate the Shroud is real, either. As some researchers have pointed out, the blood isn’t the right color — it’s red,
instead of dark brown as real dried blood is. To explain the discrepancy, a 2017 paper suggests that the stains are actually a mixture of blood and pigments, the pigments likely having been applied later on. But even if the blood and pollen are authentic, it’s circumstantial evidence at best.

There’s also the fact that to argue the image on the Shroud was created when a dead body disappeared requires us to suspend the laws of physics, or at least stretch them grotesquely. One physicist, for example, posited in a letter to the journal Nature that the event that created the image involved an outpouring of light and heat, as well as neutrons that could have thrown off the carbon dating result. While that’s technically true, Robert Hedges, an author on the 1988 carbon dating paper wrote in a response, there is also no evidence that it’s possible for a human body to spontaneously vanish in a flurry of neutrons.

“If a supernatural explanation is to be proposed,” he writes, “It seems pointless to make any scientific measurement on the shroud at all.”

Logical though that statement may be, the legacy of scientific research on the shroud reveals a curious attempt to marry the rigor of science to the mystery of religion. There are those who believe religion needs no experiments to prove its worth, and those who hunger for evidence. The devotees of Shroud science seem to fall among the latter.

Microswimmers are inanimate microparticles, however they transfer like moths to the sunshine

One of the best items for science nerds and geeks

Petrol worth crosses Rs 82-mark, diesel above Rs 72 a litre

dagold - 27 November 2020 0
Asks UI’s Governing Council to droop its assembly over appointment of VC By Joseph Erunke THE federal authorities has directed the Senate of the College...

Adam McKay’s Do not Look Up Provides Perry, Lynskey & Perlman

Petrol worth crosses Rs 82-mark, diesel above Rs 72 a litre