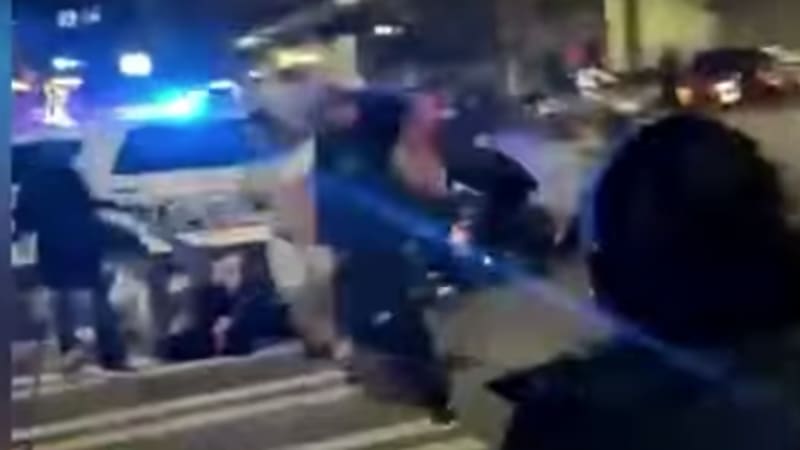 TACOMA, Wash. — Protesters set a large fire, damaged buildings and marched with signs late Sunday in response to a police car driving through a crowd in Tacoma, leaving at least two people injured.

The demonstrators gathered near the intersection in Tacoma where the police car plowed through a crowd of pedestrians while responding to a reported street sideshow Saturday evening. Video of the incident was widely shared online and appeared to show at least one person being run over.

Both injured people went to hospitals with injuries not considered to be life threatening. One person has since been released, news outlets reported.

Sunday evening, demonstrators gathered at a park, then marched through downtown where windows were shattered and spray paint was tagged on multiple buildings. Several items were set up to create a barricade in the street where a large trash can was set ablaze. The demonstrators also passed by the Pierce County Jail.

There were no known injuries from the demonstration, police said in a tweet, adding that the protest was cleared around 11 p.m.

The officer involved in the incident Saturday is a 58-year-old man who has been with the department for 29½ years, Tacoma police said. He had been surrounded by a crowd after arriving at the reported street race. People began hitting the body of the cruiser, and the officer feared for his safety. The officer drove forward through the crowd, and then stopped and called for medical aid, police said.

The officer has been placed on paid administrative leave.

Protesters told news outlets they want the officer to be fired, and criticized the city for what they said was a lack of transparency.

The Pierce County Force Investigation Team is looking into Saturday’s incident. The team comprises law enforcement officials from around the county and community representatives, The Seattle Times reported.

Police additionally said Sunday that while officers were observing the protest, three people appeared to try to get onto the roof of a building downtown. Two were armed with a handgun and knives and were arrested. The third got away.

Tacoma is located about 30 miles (48 kilometers) south of Seattle.

It’s the second year in a row, but the ACO hopes to welcome spectators this year.

dagold - 4 March 2021 0
So you want to pick up Samsung's latest handset? You're in luck because we're rounding up all the best Galaxy S21 deals across...

Apple Being Probed by UK Regulators Over App Store Policies

Shark gets stabbed in the head, washes ashore in Los Cabos

This Best Foot Massager Will Make Your Feet So Happy

Federal Authorities Confirm Sighting of Yet Another UFO

Is This Hot Hyundai Hot Enough?

eMarketer: Spotify is on track to reach US monthly podcast listenership...

I make my staff learn every day