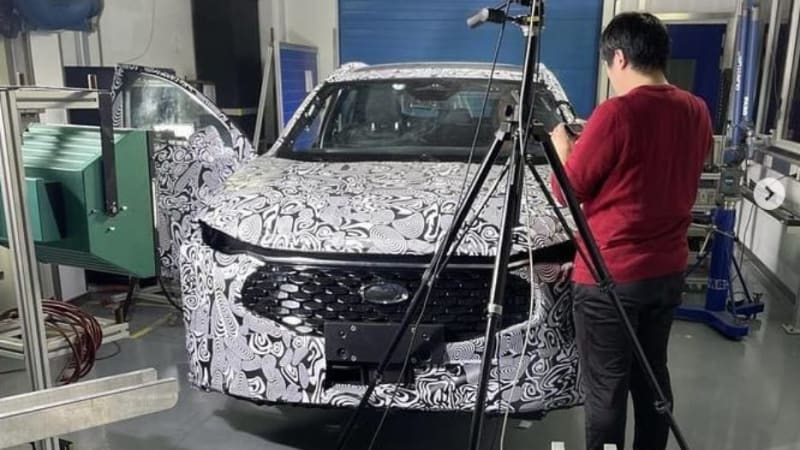 A prototype for what appears to be a Ford Fusion crossover wagon has leaked via Instagram. While the Fusion was sold in the States exclusively as a sedan, it has been offered in other variants overseas, where it is known as the Mondeo. Rumors have suggested that the nameplate could return on a midsize crossover/wagon (a la the Buick Regal TourX or Subaru Outback), and this might just be it.

“Pay attention because the photos that you are going to see below point to be the first of the future Ford Mondeo that will stop being a traditional saloon and will become a mix of crossover and family car,” @cochespias said (translation approximate) in the accompanying post.

It was photographed in what appears to be a service bay, so it’s hard to get a handle on the prototype’s size or proportions. The front end says “Edge” to our eyes, but the dramatic taper of the hatch makes it appear more wagon-like than Ford’s existing midsize crossover.

As you scroll through the images on the post, things get more interesting inside, where an almost-full-width screen steals the show. Since Ford is currently in the process of migrating toward the large, vertical screen design that first debuted with the Mach-E electric crossover, this go-wide strategy seems like a pretty significant departure from the company’s current design trends. This could indicate that we’re looking at a hand-built concept car rather than something indicative of the final production vehicle. The pretty blue dash trim lends some more credibility to this theory.

2020 brought the end of production of the Fusion sedan. It was Ford’s last practical model sold here with a trunk, and since the company’s announcement that it was bailing on the sedan market, there has been speculation that it would be replaced by an “Active” model, which Ford has used to denote lifted, vaguely rugged variants of its family haulers. Such an offshoot of the compact Focus already exists, and Ford was mulling bringing it state-side prior to the implementation of tariffs that made those plans cost-prohibitive.

What we’re seeing here is a far cry from the prototypes first spotted more than a year ago, which were early mules operating under crudely stretched Ford Focus bodies. One mule was accompanied by a previous-generation Ford Escape, which offered some context. While the overall roofline was still fairly low for a crossover, it boasted the long wheelbase of a Fusion wagon to go with its exaggerated ride height. This is more chiseled,

The hypothetical Fusion Active could kill two birds for Ford, both carrying on the Fusion nameplate and providing a more future-friendly replacement for the Flex, which managed to live years longer than its early sales figures suggested. As an added bonus, it should offer more versatility than the midsize Edge, which offers little upside over the redesigned (but slightly smaller) Escape.

That Time a Racing Legend Endorsed Healing Crystals for Cars

Small Business Debtors Get A Boost With Amendments To The Bankruptcy...

dagold - 26 January 2021 0
Changes to the Bankruptcy Code will help small businesses getty To say that businesses of all sizes have...

FAU-G review: As basic as basic can be

dagold - 25 January 2021 0
Ryan Bertrand won't be going anywhere in January amid links with a move to Arsenal. That's the verdict of former Arsenal defender Martin...

Neutrons’ ‘evil twins’ may be crushing stars into black holes