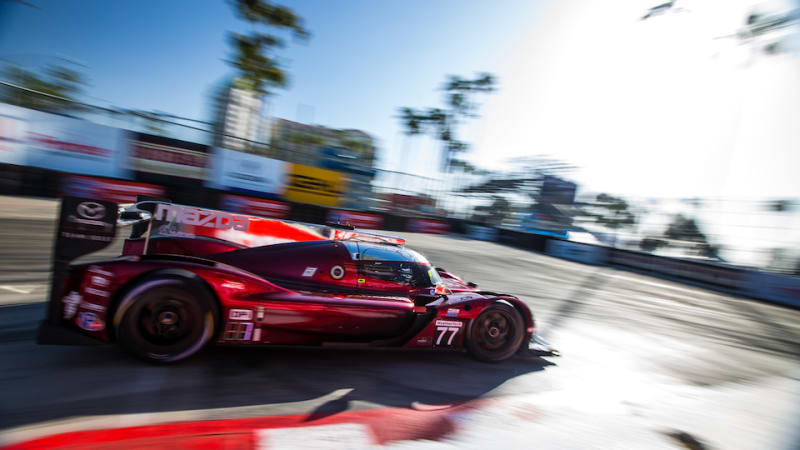 Mazda will shutter its prototype racing program at the end of the 2021 IMSA DPi season. Starting next year, the sole focus of Mazda’s motorsports endeavors will be the MX-5 Cup, a one-make series for the Miata. Mazda didn’t divulge a reason for the move, but it’s been slashing a number of racing programs in recent years.

Mazda has been closely associated with prototype racing since the early 1980s, culminating with its historic 1991 victory at the 24 Hours of Le Mans. It’s still the only time a rotary-engined car has ever won the pinnacle racing event. Mazda was also a dominant force in IMSA for two decades, from the mid-70s to mid-90s thanks to cars like the legendary RX-7. Overall, the company has over 200 IMSA victories under its belt, about half of them with the legendary rotary engine.

Mazda’s participation in motorsports was always outsized compared to its actual size as a car company. However, the writing has been on the walls. In 2019, Mazda no longer sponsored the Road to Indy ladder and scholarship program for promoting young drivers. Last year, Mazda was forced to abandon its promising Mazda 3 TCR program after a partner company closed for good as a result of COVID-19. This year, Mazda was forced to reduce the number of its RT24-P race cars to just one.

Obviously, this dashes any hopes of Mazda competing against Acura, Audi and Porsche in the upcoming LMDh series. The good news is that the MX-5 Cup will still provide accessible opportunities for amateur racers to get some track time on limited budgets. Mazda calls it a “cornerstone” of their racing efforts.

“We’re especially proud of our victory at the 12 Hours of Sebring, podium finishes at Daytona’s Rolex 24 in both 2020 and 2021, and record-setting laps at Daytona in 2019 and 2020,” said Mazda North America CEO Masahiro Moro.

Mazda, despite repeatedly coming in first in rankings for quality and performance, has struggled, sales-wise, in a tough year and its total annual U.S. sales don’t even come close to the number of RAV4s Toyota moves in a year. So while Mazda didn’t explicitly say so, we can probably assume that budget was a major factor in the decision.

Historically, Mazda has built its most revered cars during times when the company has been heavily involved in motorsports. It launched the rotary engine with an 84-hour race at the Nürburgring, won its class at the 24 Hours of Daytona and 24 Hours of Spa upon the original RX-7’s debut, and released the beloved FD RX-7 the same year it won Le Mans. When Mazda has pulled back from racing, as it did in the late 90s, its road cars got significantly less interesting. There’s good evidence that won’t happen this time around, but as in racing, anything can happen.

Hyundai will replace Kona Electric battery packs, in most expensive EV recall ever

Joby Aviation to List on NYSE Through Merger With Reinvent Technology...

Ongoing Project: Completion Of Sections 1 And 2 Of Dualization Of...

YouTube to launch parental control features for families with tweens and...

For years, I’ve tried to work my way back into the...

dagold - 23 February 2021 0
Yet I am also a woman who, after a quick succession of traumas, plunged out of the protected realms of the middle...

Google Maps tips: How to pay for parking or transit fares

24 Hours to Landing: A Timeline for NASA’s Perseverance

Nissan is ‘not in talks with Apple’ to build an autonomous...