With His Wife Sophie Turner, David, And Victoria Beckham, Joe Jonas Enjoys His B’Day Over The Weekend In Miami

The 10 Best Matcha Powders, According to Matcha Lovers

By Jack Bezants for MailOnline

Jaelene Daniels refused to play for North Carolina Courage in the NWSL game against Washington Spirit on Friday due to her Christian faith because her team were wearing a Pride jersey.

The Courage held its first ever Pride Night on Friday around the game but a spokesperson for the team told WRAL-TV in North Carolina that the 29-year-old Daniels had chosen not to participate.

‘Jaelene will not be rostered tonight as she has made the decision to not wear our Pride jersey,’ the spokesperson said. ‘While we’re disappointed with her choice, we respect her right to make that decision for herself.

‘We’re excited to celebrate the LGBTQIA+ community with our fans, players and staff tonight and look forward to hosting our first ever Pride Festival before kickoff.’

The match finished in a 3-3 draw. It’s not the first time Daniels has refused to play in matches used to show solidarity with the LGBTQIA+ community.

In 2017, she refused a callup for the United States for a game where rainbow colors would have been on the shirt. 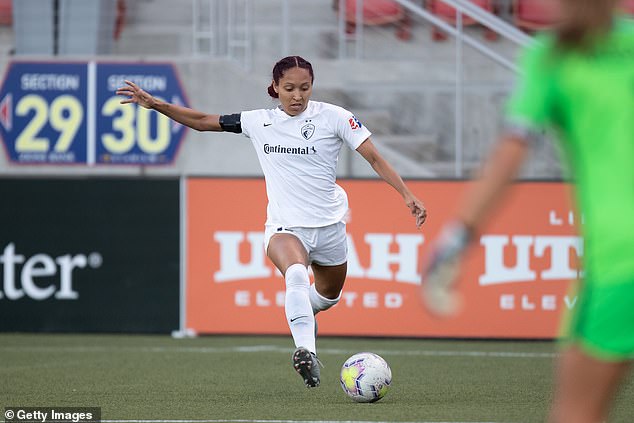 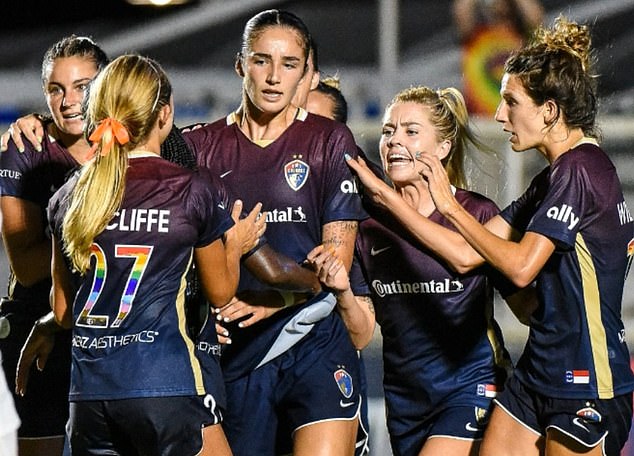 And in 2015, after same-sex marriage was legalized in the United States, she tweeted: ‘This world is falling farther and farther away from God… All that can be done by believers is to continue to pray.’

There was controversy when she signed for the Courage in soccer’s offseason last December and Daniels responded with a statement saying: ‘I remain committed to my faith and my desire for people to know that my love for them isn’t based on their belief system or sexuality.

‘I pray and firmly believe that my teammates know how much I cherish them, respect them and love them.’

The Courage also apologized to supporters. It said: ‘In response to the recent news of re-signing Jaelene Daniels, we as a club acknowledge the impact this announcement has on our community.

‘We’ve spent the past few days reading your messages and reflecting on our actions. We are very sorry to all those we have hurt, especially those within the LGBTQIA+ community.

‘The decision to re-sign Jaelene was not made lightly and included significant conversations between organization leadership and Jaelene. The priority expressed in those conversations is the safety of our players and maintaining an inclusive, respectful space for the entire team.’ 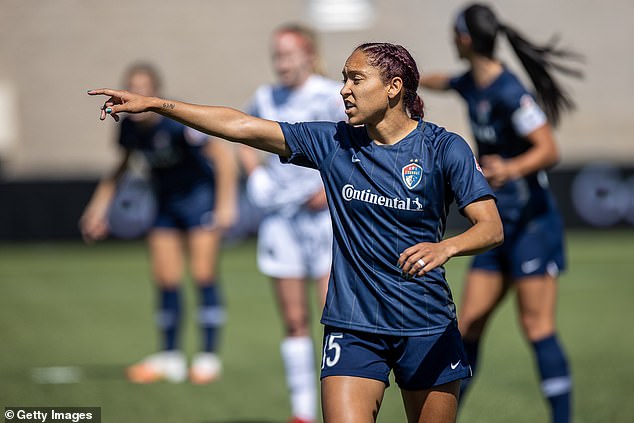 Players choosing to miss games that are used to express solidarity with the gay community is not unheard of.

In France, midfielder Idrissa Gueye missed Paris Saint-Germain’s league game with Montpellier due to what was widely reported to have been a refusal to wear rainbow colours.

His manager at the time, Mauricio Pochettino, said Gueye was missing for ‘personal reasons, but he is not injured’.

Gueye is a devout Muslim and he regularly shares messages about his faith across his social media platforms.

In some Islamic countries, homosexuality is illegal and even punishable with the death penalty.

In Gueye’s native Senegal, homosexuality can result in five years imprisonment and gay marriage is not legal.

In February in Senegal, there was a protest organised in the capital of Dakhar by ultra-conservative Muslim groups that was attended by thousands, calling for harsher punishments for the LGBTQ community.

Gueye could move back to the Premier League this offseason – his old team Everton are interested in signing him again.