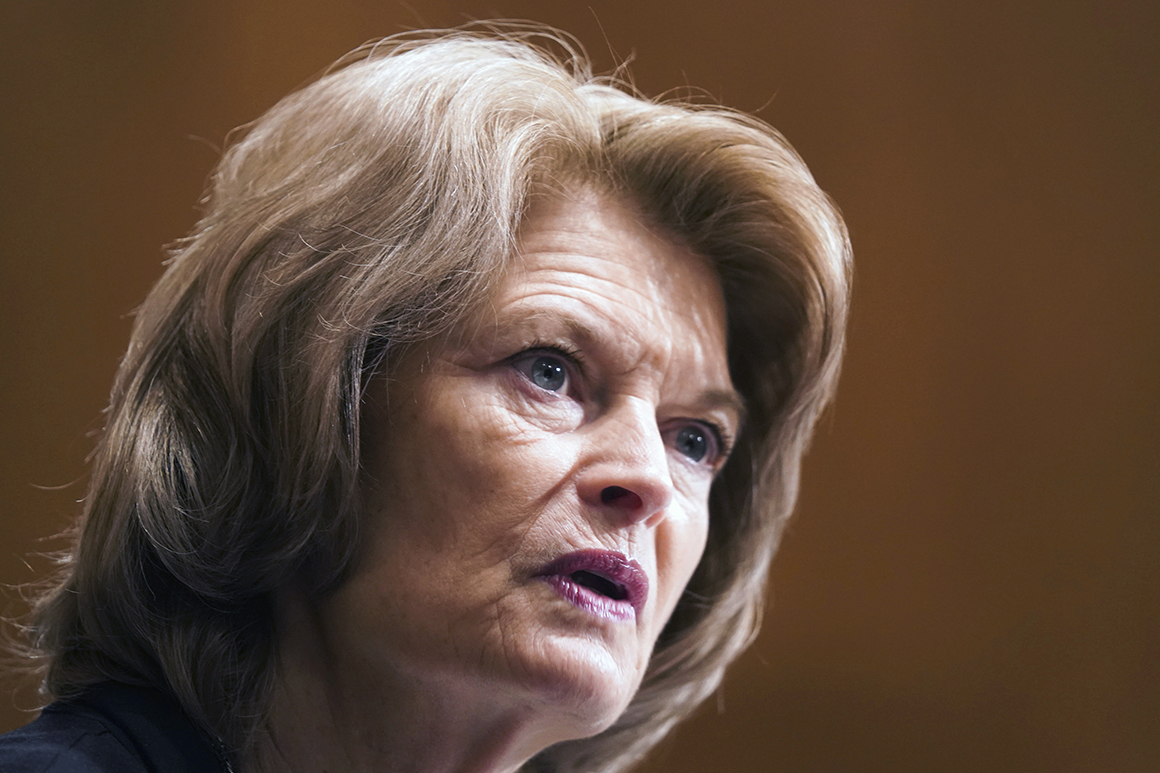 “I can just sit back and say, ‘I don’t want to have anything to do with it, it’s a bill that spends too much and it doesn’t help in a targeted way’,” Murkowski said. But instead, she explained, “I’ve got to look at it from the perspective of ‘all right, it might not pass with my support. But if it’s going to pass, are there ways that it can be shaped’?’”

Asked about the Alaskan on Thursday, Sen. John Barrasso (R-Wyo.), the No. 3 GOP leader, dug out a paper clipping of a Washington Post story about Murkowski.

“Sen. McConnell has been very clear on that, for all Republicans. The goal is to present a united front against this massive spending bill,” Barrasso said. “It’s my hope that every Republican would vote no at a time we’re in a 50-50 Senate.”

Murkowski is unique, however, and so is her home of Alaska. The state is suffering economically, the pandemic has exacerbated the state’s woes, and she’s complained repeatedly that Biden’s less fossil fuel-friendly energy policies are hurting Alaskans. Moreover, her state changed its primary system recently to dilute the possibility of a conservative or Trump-inspired challenger, giving her room to legislate from the middle.

The centrist senator has held talks with the Biden administration about her state’s unique situation for several days now. She also cast a committee vote to support Rep. Deb Haaland (D-N.M.) to be Interior secretary on Thursday, even after her party portrayed Haaland’s energy policies as radical and despite some of her own policy reservations about the nomination.

But the $1.9 trillion stimulus bill is a much bigger matter than Haaland. And Murkowski’s approach to it is clearly on GOP leaders’ minds.

Sen. Ron Johnson (R-Wis.), who is leading opposition to the bill, said he has his “fingers crossed” that Murkowski joins the opposition. Technically Sen. Susan Collins (R-Maine) is also not a hard no, although she is unlikely to support the bill.

Murkowski called herself “listening Lisa” on Wednesday, admitting she was torn over what to do about the Covid legislation and talking to members in both parties. The moderate Republican is frustrated that Democrats have ignored bipartisan entreaties and written a bill that isn’t more narrowly focused on coronavirus relief spending.

Yet Murkowski also has acknowledged that her state is in a perilous situation that complicates the straightforward partisan calculus involved in opposing the massive recovery measure. She said she wants Democrats to make the case for why the bill is good for Alaska and clearly wants some changes to the legislation.

“We’re a 50-50 Senate. I am not in the majority, but it’s a pretty close divide, so I want to make sure that I can still be an effective lawmaker for my state — majority or minority,” she said on Thursday. “But the way that I do it is to talk to people and tell them what we got going on.”

Neera Tanden and the Biden administration lobbied Murkowski hard on her vote as Tanden fought to become Biden’s budget chief, a nomination that was pulled earlier this week. Much of their discussions centered on Alaska.

But in comparison to previous moments of uncertainty about Murkowski, Republicans are nudging her more directly to stay in their corner on the coronavirus bill.

“I hope that she would. Obviously, it’s a pretty toxic bill,” said Sen. James Lankford (R-Okla.). “Alaska’s definitely a unique state, to say the least. But it is still part of a $2 trillion consequence, long-term, for the whole country.”

The Biden administration’s rejection of 10 GOP senators’ entreaties for an aisle-crossing negotiation “has a part to play in this,” Rounds added.

But so too does local politics. Murkowski is up for reelection in 2022, and she is keen on standing up for the interests of her state. And to anyone that asks she’ll tell you: Alaska needs help.

The plan for Prince Philip’s mourning period and funeral

Phillip Adams’ brain to be tested after South Carolina shooting

Racism against African people is finding safe haven in the international...

Some LG phones will get Android 12