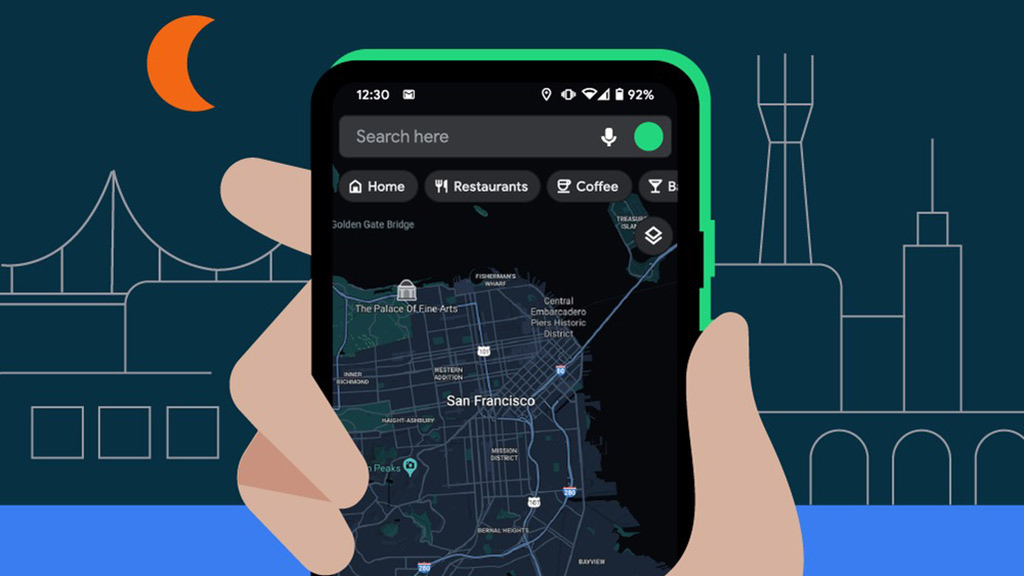 Six Google apps are getting free updates that improve their features, security, and accessibility. Some of these are belated, like Google Maps getting universal Dark Mode across the whole app, while others integrate perks available in other services, like using Messages to schedule a text in advance.

There doesn’t seem to be a particular rhyme or reason for these apps to get improvements, according to Google’s blog post, but we aren’t complaining – just keep in mind that they’re not coming to all versions of Android, with different minimum versions for each update (we’ll disclose these thresholds below). Also these updates will be rolling out to Android phones ‘soon,’ so they could reach your devices in days, weeks, or longer – but they’re coming.

Let’s go through each app update one at a time.

Google Maps had Dark Mode, but it only kicked in while actively navigating to a destination. Now, every screen of the app will follow the easy-on-the-eyes Dark Mode visual pattern.

Once your Google Maps has been updated, you can turn it on for your entire phone by heading to Settings > Theme and pick Always In Dark Theme. As far as we can tell, this is coming to Google Maps in every version of Android.

Scheduling a text message in Messages

This one’s pretty easy. Once your Messages app has been updated, you can compose it as normal and then long-press the ‘Send’ button to open up a menu where you can select the date and time you wish it to be sent.

This feature is available for Messages app owners running Android 7 and above.

TalkBack screen reader: better all around

Google’s screen reader app, TalkBack, has been overhauled with input from blind and low-vision communities to be more intuitive, flexible, and responsive. There are more voice and gesture controls, a unified menu, a new reading control menu that allows you to customize gestures, and more.

These updates seem to be coming to all versions of TalkBack – just download the latest version, which is available now.

A Password Checkup update will tell you if login credentials you’ve used have been compromised – and now, the feature can scan across all your apps.

If you use Google’s Password Manager to Autofill usernames and passwords in apps or online in Chrome, Password Checkup can help by scanning every credential you use against publicly-available lists of passwords that have been compromised – that is, known to be stolen and potentially involved in mass leaks.

If Password Checkup detects you’ve used one of these passwords, it’ll alert you via popup to change it. This feature is available to Android 9 users and later. Unsure if you’ve activated Autofill? Head to Settings > System > Languages & Input > Advanced to tap Autofill Service, though that may not be the path to selecting Autofill on your Android phone – in that case, use your Search function to find ‘Autofill,’ as CNET recommends.

Google Assistant: interact while the screen is locked

A new update for Google Assistant will have it respond even while the screen is off and the device locked – if so, it will display cards with text that’s larger and easier to read from farther away, making it less of a chore to check Assistant’s responses to your inquiries.

To toggle the feature on, head to Settings > Google Assistant and tap Lock Screen Personal Results. This is presumably available to all Android versions.

Android Auto’s update adds shortcuts to the launch screen that will give quick access to your contacts, Google Assistant, weather, and more. Cars with wider touchscreens can use a split-screen feature to use Android Auto alongside Google Maps and media controls. You can also add a privacy screen that controls when Android Auto appears on your display.

The update also adds voice-controlled games, like Jeopardy and other trivia-like titles.

Finally, the update now allows users to choose from a selection of wallpapers, including those with ‘car-inspired backgrounds,’ as the update puts it. The new features should be available in the coming days to users running Android 6.0 or above.

Running the old Google Pay app? Here’s why you should switch, and how to do it

Need to manage your small business? Look no further than an HP Intel Evo device

3 Keys To Unlocking Your Entrepreneurial Superpower

This Is What Old World Poké Balls Look Like In Pokémon...

This long-forgotten Star Wars game is coming to PS4 and Switch...

Console games we want on PC