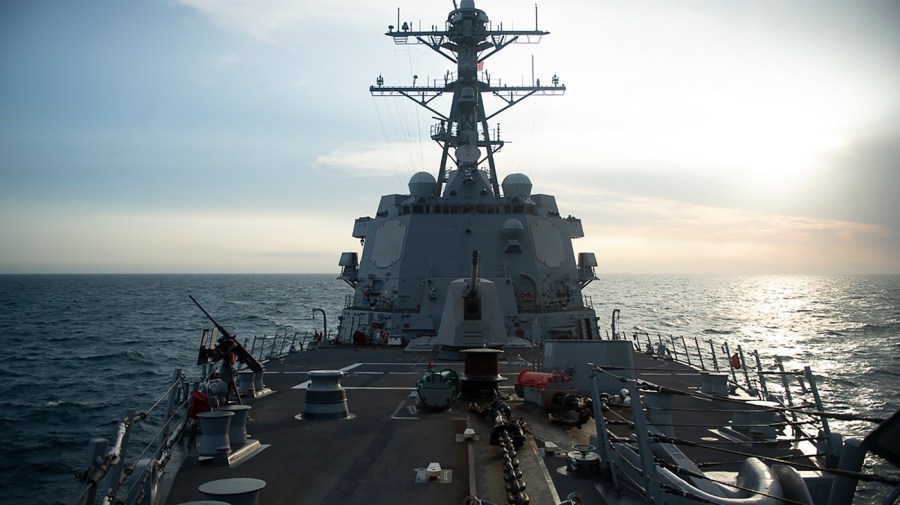 History will record that the United States and NATO, after repeatedly encouraging Ukraine’s membership, failed abysmally to deter or defeat Russia’s ongoing aggression and the consequent death, destruction and loss of Ukrainian sovereignty.

China has learned important lessons in pursuing its own ambitions against Taiwan, including the critical role of maritime domain control. Russia’s domination of the Black Sea is a model for China’s designs on the Taiwan Strait. Chinese leader Xi Jinping is claiming the strait as exclusively Chinese waters, just as Russian President Vladimir Putin effectively has made the Black Sea a Russian lake.

As Russia blockades the Ukrainian ports of Mariupol and Odessa, preventing the export of life-sustaining grain to Africa and the Mideast, China will seek to close off Taiwan’s key ports, Kaohsiung and Keelung, and potentially strangle the island’s economy.

President Biden set the tone for NATO’s response when he declared that America will neither intervene directly, such as by imposing a no-fly zone, nor provide the most effective defensive arms Ukraine urgently needs. He fears that either would lead to direct Russia-U.S.conflict, saying “that’s called World War III.”

On three occasions, however, Biden stated that the U.S. would directly intervene to protect Taiwan against nuclear-armed China. Yet, each time, administration officials have disavowed any change in the decades-long U.S. policy of “strategic ambiguity” on defending Taiwan.

Given China’s increasingly aggressive actions and rhetoric against Taiwan, and the emerging evolution under both the Trump and Biden administrations to a one China/one Taiwan policy, Beijing and Washington are on a collision course. Avoiding military conflict requires a multinational, multidimensional campaign to prevent a Chinese miscalculation.

As with Russia on Ukraine, China’s challenge is not just to Taiwan but to the entire rules-based international order and the survival of regional democracies. China’s missile firings to protest Taiwan’s first direct presidential election in 1996 closed the Taiwan Strait, a long-established international waterway, to commercial shipping and aviation.

Now, Beijing is arrogating to itself the right to control the strait, connecting the East and South China Seas, on a permanent basis. Seagoing nations, and countries that depend on their commerce, need to oppose China’s fabricated assertion of maritime sovereignty. In addition to mobilizing a collective diplomatic, information and sanctions campaign, Washington and its allies must implement two legal initiatives for contesting illegal maritime claims — one through direct action, and the other using the established international dispute mechanism.

Contrasting with Western passivity in the face of Russia’s control of the Black Sea, the G-7, at its meeting this week, should call for NATO and the European Union to organize a regime of collective Freedom of Navigation Operations (FONOPS) to assert international access to the Taiwan Strait. Since the U.S. Navy has conducted such FONOPS regularly for several years, it is well-suited to lead the exercises. It also could provide escort services, similar to what it did during the Iran-Iraq war for commercial oil tankers defying Iran’s claim of sovereignty over the Persian Gulf.

At the same time, nations that have been conducting their own transits through the strait — such as the United Kingdom, France, Canada and Australia — should join with other affected parties and file a legal action before the International Tribunal on the Law of the Sea seeking arbitration of China’s Taiwan Strait claim. The United Nations Convention on the Law of the Sea (UNCLOS) “obligat[es] State Parties … to settle their disputes peacefully,” as does the U.N. Security Council, but the Chinese and Russian vetoes prevent meaningful council action.

While not itself an UNCLOS member, America fully supports its principles and decisions — in direct contrast to China, which has ratified the convention but flagrantly flouts its rules. Washington applauded the tribunal’s 2016 ruling in favor of the Philippines and against China’s illegal South China Sea claims that are akin to its present assertion over the Taiwan Strait.

This two-track legal/operational strategy is consistent with the U.S. position that Secretary of State Antony Blinken laid out last month: “We’ll continue to oppose Beijing’s aggressive and unlawful activities in the South and East China Seas. … We’ll support the region’s coastal states in upholding their maritime rights. We’ll work with allies and partners to uphold freedom of navigation and overflight. … And we’ll continue to fly and sail wherever international law allows.”

The approach also implements the principle that Adm. Timothy Keating, commander of the Pacific Command, declared he took the USS Kitty Hawk Battle Group through the strait over Beijing’s vehement objections in 2007: “We don’t need China’s permission to go through the Taiwan Straits in international waters.”

Unfortunately, however, that was the last transit by a U.S. carrier and the first since the 1995 Taiwan Strait Crisis, making only two such passages in the 50 years since President Nixon pulled the Seventh Fleet out in a preemptive concession to Mao Zedong, paving the way for Nixon’s visit to Beijing and more U.S. concessions. Years later, Nixon rued that his flawed opening to China “may have created a Frankenstein,” and he concluded that China and Taiwan “are permanently separated politically.”

Now, Beijing has expanded its posture beyond a China-Taiwan or China-U.S. issue, and is asserting an expansive claim against the entire commercial world that utilizes, or benefits from, the Taiwan Strait — just as it did earlier in the South China Sea. The Biden administration should respond by organizing a multinational Freedom of Navigation Flotilla through the Strait, led by a Navy carrier strike force.

Washington will enhance its credibility in leading other nations to stand up to Chinese aggression when it finally dispenses with its ambiguous, counterproductive policy on defending Taiwan.  When Chinese military officers directly asked the question in 1996, the Clinton administration’s lead China official answered, “We don’t know; it would depend on the circumstances.” He did not mention the 1979 Taiwan Relations Act (TRA).

Trump and Democrats are both losers so far in Jan. 6 hearings

What is actually killing Americans and how to solve it

A decade later, U.S. administrations began invoking the TRA’s mandate that Washington provide defensive arms, but without reference to a direct U.S. role. Blinken mentioned for the first time the TRA requirement that the U.S. “maintain the capacity … to resist any resort to force or other forms of coercion” against Taiwan, but didn’t address Biden’s pledge to do so.

As the U.S. moves closer to recognizing Taiwan’s separate political identity, there remains another critical TRA provision that has gone unnoted for 43 years, with the potential to revolutionize a half-century of U.S.-China relations — that recognition of China “rests upon the expectation that the future of Taiwan will be determined by peaceful means.”

Joseph Bosco served as China country director for the secretary of Defense from 2005 to 2006 and as Asia-Pacific director of humanitarian assistance and disaster relief from 2009 to 2010. He served in the Pentagon when Vladimir Putin invaded Georgia and was involved in Department of Defense discussions about the U.S. response. Follow him on Twitter @BoscoJosephA.