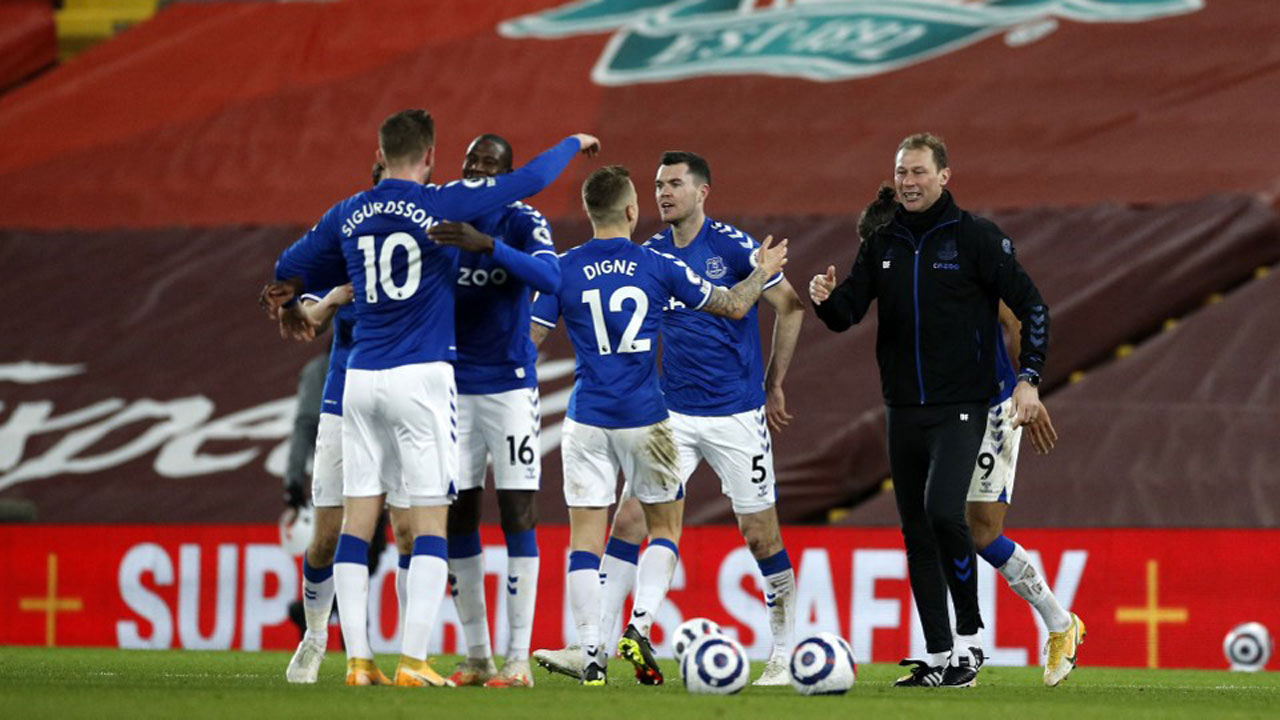 Everton earned their first win at Liverpool since 1999 as the troubled Premier League champions crashed to a 2-0 defeat in the Merseyside derby, while Chelsea’s revival under Thomas Tuchel stalled in a 1-1 draw against Southampton on Saturday.

Richarlison gave Carlo Ancelotti’s side the perfect start with his third minute strike.

Having dominated their Anfield clashes with Everton for the last 22 years, Liverpool finished a home derby empty-handed for the first time since Kevin Campbell’s winner for the Toffees.

It was also Everton’s first victory against their hated neighbours in any venue in 24 matches in all competitions dating back to 2010.

Jurgen Klopp’s team have suffered four successive league defeats and a run of just two wins in their last 11 games in the competition has left them in grave danger of missing out on a top four finish.

The Reds are languishing in sixth place and would be five points adrift of the Champions League places if fifth-placed West Ham beat Tottenham on Sunday.

After a run of 68 league games unbeaten at home, injury-ravaged Liverpool have lost their last four on home turf for the first time since 1923.

The sting from defeat in the 238th Merseyside derby will linger even longer given it was a bad tackle from Everton keeper Jordan Pickford in their meeting earlier this season that left Virgil van Dijk sidelined ever since with a serious knee injury.

Without the influential Dutch centre-back, Liverpool have endured a wretched time and their defensive flaws were exposed by Everton after just 145 seconds.

A weak headed Ozan Kabak clearance fell to James Rodriguez, who slipped in a pass behind the on-loan Schalke centre-back and Richarlison ran on to fire an angled drive past Alisson Becker.

Liverpool applied all the pressure in the second half but they were hit with a sucker punch seven minutes from time when Dominic Calvert-Lewin was brought down by Trent Alexander-Arnold.

Referee Chris Kavanagh was asked by VAR to look at the pitchside monitor, but the official took just a few seconds to decide he had made the right decision and Sigurdsson stroked home the penalty.

Everton are now level on points with Liverpool and have a game in hand on their rivals.

Salman Khan says he is ‘awkward, embarrassed and yet delighted’ to...

dagold - 27 February 2021 0
We’ve all seen Bollywood star Salman Khan paint portraits at home or on the sets. According to the actor’s latest tweet, his paintings...

HSBC annual results: Bank is pushing even harder into Asia and...

VH1 Host to Rock Bottom to Working with the Biggest Names...