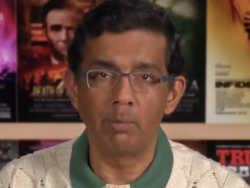 Conservative Documentary filmmaker Dinesh D’Souza responded to an article posted on National Review critical of Rush Limbaugh and his political approach.
D’Souza highlighted the differences between Rush Limbaugh and the founder of National Review, William F. Buckley Jr., and their views of conservatism. “Bill Buckley was smart but no one’s dad played him on the radio while they were putting up houses, making pizzas, or cleaning the shop,” said D’Souza. “They played Rush. So the point here is that Rush is much more accessible than Buckley. People can figure out what Rush is saying, half the time with Buckley you couldn’t.”

Nomadland Ending: Where Does Each Character Go From Here

dagold - 27 February 2021 0
Linda (played by real-life nomad Linda May) could be considered Fern’s best friend as the two work together and share stories all across...

Time’s Up Calls Out Golden Globes After HFPA Vows to ‘Bring...