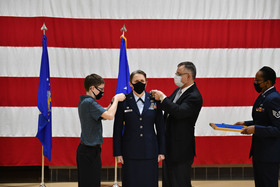 LATHAM, NEW YORK (01/06/2021) (readMedia)– Denise Donnell, the commander of the New York Air National Guard’s 105th Airlift Wing, which is based at Stewart Air National Guard Base in Newburgh, was promoted to brigadier general during a ceremony held at New York National Guard headquarters in Latham, New York, on Wednesday, January 6.

Donnell has commanded the wing since 2017 and will continue as the wing commander. The base is also host to the Marine Corps Reserve’s Marine Aerial Refueler Transport Squadron 452 and Marine Aviation Logistics Squadron 49.

Normally, her promotion would have taken place in one of the wing’s massive hangers with 1,000 Airmen in formation. Due to the COVID-19 pandemic a small group of 35 people gathered at New York National Guard headquarters and others viewed the proceedings over a Zoom call.

Maj. Gen. Timothy LaBarge, the commander of the New York Air National Guard, said the Donnell was promoted to the general officers rank because of her leadership skills and drive.

Donnell, who has more than 4,000 of flying hours in aircraft ranging from the giant C-5 Galaxy transport to the Navy’s P3 Orion patrol plane, started her career in the Navy and has served in the New York Air National Guard since 2002.

In her remarks, Donnell thanked her family for their support and those along the way who helped her do well.

“It is an honor to continue to serve the men and women of the 105th Airlift Wing,” Donnell said. “This star is as much for them as it is for me.”

Chaplain (Lt. Col.) Robert Tilli, the chaplain of the 105th Airlift Wing, noted that the star, the rank of the general officer, has traditionally denoted exceptional things. Donnell, he said, has been an outstanding leader and “she truly is a shining star.”

Her husband Greg Szczesny, and son Max Szczesny pinned her new one star rank on her uniform during the ceremony. Her daughter Alison presented her with a new officer cap with one star.

The 105th Airlift Wing has more than 1,300 military personnel with a payroll of over $78 million.

Donnell was born at Camp Pendleton, Calif., and graduated from Georgetown University in 1993 with a Bachelor of Science Degree in Foreign Service. She received her commission through Naval ROTC and served in the Navy for nine years as a naval aviator.

She joined the New York Air National Guard’s 105th Airlift Wing in 2002 and qualified to fly the C-5 galaxy.

In 2005 she was selected as the commander of the 105th Aircraft Maintenance Squadron and earned her maintenance badge while continuing to fly as a C-5 aircraft commander.

In May 2010, she assumed command of the 105th Maintenance Squadron, and led the unit through a conversion from C-5 to C-17 aircraft and simultaneously qualified as a C-17 pilot.

In 2013 she was assigned to the 109th Maintenance Group at Stratton Air National Guard Base in Scotia and also qualified to fly the LC-130 “Skibird” that the wing flies in support of missions in Antarctica and the arctic.

In 2016 she was reassigned to the 105th Airlift Wing as wing vice commander.

Donnell holds a Bachelor of Science Degree from Georgetown University and is also a graduate of the Air Command and Staff College and the Air War College.

Her husband, Greg Szczesny is the president of Saratoga Advisors and a graduate of the United States Military Academy. They live in Clifton Park, N.Y. near Albany.

Stimulus checks and your 2020 taxes: Important stuff you should definitely...