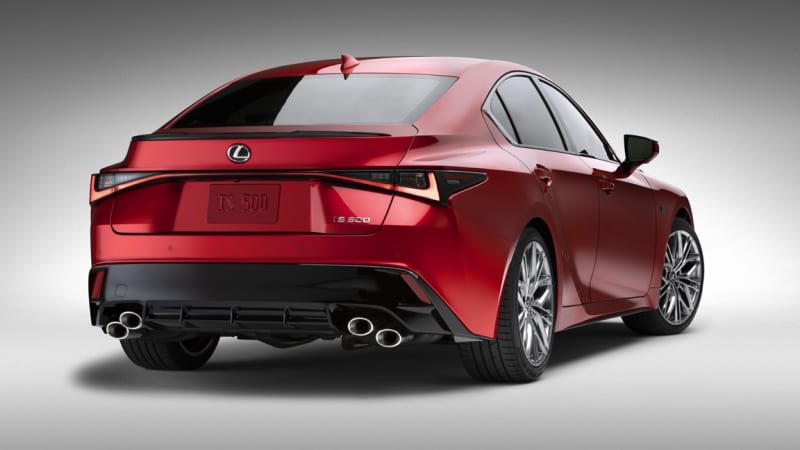 The 2022 Lexus IS 500 F Sport Performance revives the dormant IS F formula, bringing V8 power back to the compact luxury Japanese sport sedan for the first time since 2014 and confirming rumors of a new series of V8-powered performance (small p) cars from Lexus.

Very little surprises us these days, especially in the luxury segment, but if you’d told us a month ago that we’d be confirming a V8-powered Lexus IS and a new, all-four-cylinder lineup for the Mercedes-Benz C-Class in the same week, we’d have called you crazy. Parent company Toyota’s presence in Texas may have rubbed off on Lexus, though, because after a years-long hiatus, the V8-powered IS sedan returns. That’s right. A V8. In a brand-new compact sport sedan. In 2021.

The new sport sedan will pack a 472-horsepower, 5.0-liter V8 with 395 pound-feet of torque, making it the spiritual successor to the discontinued Lexus IS F. For those keeping track at home, yes, that’s the same V8 Lexus has utilized elsewhere in recent years. It currently powers the RC F coupe and, until last year, was also found under the hood of the larger GS F sedan. Like the BMW M3 it matches for power, the Lexus will come standard with rear-wheel drive and a limited-slip differential, making it a true performance machine.

Power will go to the rear end by way of the same eight-speed automatic Lexus uses elsewhere as well. Sorry, folks, there’s no stick, but hey, the IS F didn’t have one either, so let’s not get too picky. The original IS F also offered just 416 horsepower and 371 lb.-ft. of torque, so remember, this is all upside here. The original also launched without the LSD, if you’ll remember; that came later.

Lexus made no mention of an all-wheel-drive model, which may be bad news for those who need a one-size-fits-all solution, but the AWD system offered in the IS only adds weight and complexity. It’s also a bit of an inconvenience, because it requires a noticeable protrusion into the driver’s side footwell to make room for the necessary drivetrain components. It is also paired with a decidedly less sophisticated (or snappy) six-speed automatic. With apologies to those who feel they need the extra driven wheels, we’re not bothered by the omission.

You’ll note that Lexus snuck the word “Performance” into the new, V8-powered car’s name. Lexus is calling this the first in a new line of enthusiast-oriented models that “will appeal to passionate driving enthusiasts that crave higher levels of performance over the standard F SPORT models.” While that means a V8 here, Lexus made no indication that we should read that into any subsequent Performance (capital P) versions. Color us intrigued — and more than a little excited.

We also don’t know what this means for the future of “F” as the Lexus performance brand. The existence of the RC F coupe has long served as rationalization for not reviving the Lexus IS F sedan, so we can’t help but wonder whether we should take this as a sign that the coupe is not long for this world. Our dearly departed friend, the GS F, certainly sets a grim precedent.

How Do You Remove the 2021 Ford Bronco’s Fenders?

How Do You Remove the 2021 Ford Bronco’s Hard Top?

How to Watch ‘Raya and the Last Dragon’ on Disney Plus

Man accuses wife of spitting in his food, seeks divorce

dagold - 28 February 2021 0
The Shooting Stars Sports Club (3SC) of Ibadan on Sunday continued their unbeaten run by coming from one goal down to beat their...

Man accuses wife of spitting in his food, seeks divorce

Court sentences labourer to death by hanging in Ogun